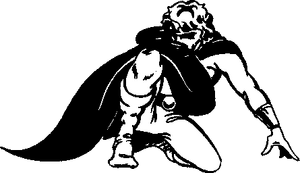 Sultan of Stealth, Chief of Chicanery, Potentate of Plunder, the Thief is the master of many skills. From subterfuge to housebreaking, Thieves live by their wits. Since the Thief cannot fight as effectively as the Fighter, or cast spells as the Magic User, he seems to be the weakest of adventurers. However, he is also the most powerful of adventurers, for he can get away with murder.

Bulky armor severely crimps the Thief's style since it's noisy and reduces stealth. Heavy weapons also interfere with Thief skills, lowering Agility and Acrobatic abilities severely. In general, Thieves prefer light armor and small weapons. A Thief's best bet is to sneak away from combat. If that's not an option, use throwing weapons to try to bring down your opponent.

While other characters unselfishly attempt to make the world a better place for everyone, the Thief acts to make sure it's a better place for yours truly. Though still a Hero, a good Thief knows how to commit crimes and not get caught. The Thief will find opportunities aplenty in most cities, most of them profitable. Thieves rely on their Agility and Stealth skill . Combat is best avoided by dodging enemies with clever maneuvers. Though good at finding places to hide, when cornered, the Thief is also skilled at throwing daggers. Choose the Thief if you want to use cunning and craftiness to keep your Hero out of trouble.

The Thief is definitely the most subtle and complex of the three characters you can choose to play. There are many things for a Thief to do in addition to winning. A Thief is scored by how well he plays the game according to Thief Rule #101: Stealth is Wealth. To attain the highest score possible, a Thief needs to find ways to sneak past guards and deactivate alarms wherever he goes. Above all, he must avoid getting caught.

Bulky armor severely crimps the Thief's style since it's noisy and reduces stealth. Heavy weapons also interfere with Thief skills, lowering Agility and Acrobatic abilities severely. In general, Thieves prefer light armor and small weapons. A Thief's best bet is to sneak away from combat. If that's not an option, use throwing weapons to try to bring down your opponent.

The ultimate win for the Thief is to become Chief Thief. That his is career goal.

Most of the following is taken from the Quest for Glory V: Dragon Fire manual.

Thieves, for the uninitiated, are a surprisingly social bunch. After all, what good is a secret when you have no one to share it with? It's hard to brag about what you bag or sell your swag without the help of the local Thieves' Guild. Since going around asking people where the Guild is will either get you killed or arrested, Thieves have developed a way to communicate with one another: the Thief Sign. So make the sign anytime you meet the potential purloining practitioners who might provide a guide to the Guild.

Sneaking comes naturally to a Thief, so you will find yourself slipping into that old familiar slink without thinking. It's not a good idea to sneak everywhere you go - people tend to notice and think you're strange. At night, however, you can sneak behind people and duck behind things and, if you're good at it, most people won't see you. Sneaking is also useful when you try to pickpocket an unsuspecting passerby or blackjack an oblivious guard.

A Thief needs a wide variety of equipment to get into places he doesn't belong. The Acme Thieves' Toolkit has several styles of lock picks and trap disarming mechanisms. Your Thief will also need oil. This doesn't come in the toolkit, but you can pick some up at your local Thieves' Guild.

The traps around Silmaria are all variations of the Acme Dancing Man Menace. This can be a very dangerous trap for the unwary, resulting in death or severe injury if it explodes. The object to disarming a trap is to match the dancing man in the center with one in a compartment on the outer ring.

The best way to get on top of things (in Silmaria at least) is to use a rope and grapnel. Just a delicate flick of your wrists and you'll be scaling the sheerest of fortress walls!

A useful way to accumulate some ready cash is to take it from somebody else. To pick someone's purse or pocket, you need a handy Pickpocket Knife. This nifty item has a hook for catching purses, a knife to slit them, and a bag to hold the loose change. It slices, it dices (but it doesn't make julienne fries).

Picking pockets is a fine art. You've got to be skilled with a knife, and good at sneaking. It's one thing to give your Pickpocket Knife a dexterous twist of the wrist; it's another to look so cool that you're victim doesn't know he's being robbed. Practice is essential (and available at the Thieves' Guild in the form of a pickpocket dummy).

Blackjacking is the fine art of knocking people unconscious before they realize you're behind them. To sap a victim, you need a special tool that can be purchased at your local Thieves' Guild.

To Blackjack someone, you must first sneak up behind him. You cannot use the Blackjack on someone who sees you first. Once you get near someone, aim for the base of the neck and give a hardy swig with the sap. If your skill is high enough, even the toughest guard will fall without a fight! That's the guarantee or no money back.