Quest for Glory Omnipedia
Register
Don't have an account?
Sign In
Advertisement
in: Males, Paladins, Royalty,
and 5 more

Rasha Rakeesh SahTarna (aka Rakeesh Sah Tarna) is a Liontaur Paladin, a warrior who gains mystical powers from his great honor. He first introduces the Hero to the concept of honor and becomes his guide in the ways of the Paladin in the city of Shapeir.

Rakeesh is portrayed one of the Hero's closest friends - quite arguably, a father figure as well (he sees the hero as much a son as Shakra).

Rakeesh comes from a long line of proud warriors.[1] When he was younger, he did much adventuring and exploring.[2] During one of these adventures he travelled to Thebes to learn the way of the Warrior. While there he met Logos, who mistook him for a Sphinx.

Rakeesh would later become the ruler of his homeland of Tarna. While he was king, a Demon Wizard sought through magical means to break the barriers between Gloriana and Hell and sent an army of Demons against Tarna.[3] The massive bronze gates were closed in preparation for war, when they opened, they revealed the warriors of Tarna who went out to fight the Horde. The wizard sent a powerful Demon in an attempt to overthrow his kingdom. Rakeesh attempted to fight it himself since it was destroying his people. During the battle, he suffered an injury to his left hind leg from it's poisoned tail, but successfully defeated the creature.[4] The bone was shattered, and the poison prevented it from healing correctly.[5] The rest of the Demon horde was soon driven off by the Liontaur fury.[6]

Rakeesh learned that the Wizard had been a Demon-Wizard. He knew had not truly won, he knew that the Demons would return again when they were stronger. He could not convince the Council of Judgement to persue the Demons beyond the kingdom. He decided to forfeit the throne of Tarna to stop the Demons himself, passing it to his arrogant brother Rajah Sah Tarna.[7]

After the Demons left Tarna, he followed them north to Egypt. In the bazaar at Gaza, he met a Paladin. She came to his defense, for the people of the bizaar assumed he was a monster. He told her of his mission, and she taught him the way of the Paladin.[8] After he had proven his worthiness in a mighty battle, the Paladin passed on her sword, Soulforge to Rakeesh.[9]

Eventually he returned to Tarna many years later, when demons attacked the kingdom again. Rakeesh stood before the Liontaur in battle with his sword held high. The sword was bathed in blue flame. Most demons fled from him. Those who didn't were destroyed by Rakeesh[10] Rakeesh persued and drove the Wizard back to its own world with the power of Soulforge.[11] The Demon swore revenge upon him as it was forced back to its world.[12] It had left its taint of its magic on his leg, retained a link through it.[13]

The intervening years are unclear, but years later he was summoned to Shapeir to aid against the Dark Magic which hovered near the city. But his was not the Hero he once was, as he was hobbled by his injury. He noted that he started becoming more of a philosopher than a warrior, preferring to sit and talk about solving problems rather than doing something for them. He is still strong enough to Will bright red flames to his sword from his own strength, for other warriors to borrow to fight on his behalf. He is however still shown at times to wield blue flame as well (see QFG3 Paladin initiation ceremony). These may represent different paladin abilities.

Interactions with the Hero[]

The Way of the Paladin[]

In Quest for Glory II, the Hero and Rakeesh meet after they are both summoned to the desert city of Shapeir to deal with a crisis in Shapeir's sister city, Raseir where he carries his flaming sword, the Soulforge. In Shapeir, Rakeesh helps run the Shapeir Adventurers' Guild with his friend Uhura, the Simbani warrior woman; he also valiantly but unsuccessfully battles an Earth Elemental that attacks the city.

It is here that the Hero first learns of honor and the Way of the Paladin from Rakeesh. During his stay in Shapeir, Rakeesh remains a constant source of insight and guidance for the Hero along the way.

The Day 1 he appears outside the Guild, the next day inside playing with Simba, while the third day he is again outside playing with Simba, enjoying the hot weather (ebviously referring to the arrival of the Fire Elemental). He appears again on Day 7 inside the Guild, and offers the Hero the Sultan's reward of 50 dinars for defeating the Fire Elemental. On Day 11 Uhura says that Rakeesh is talking with the Sultan about the arrival of more elementals; indeed the next day while the Earth Elemental attacks the city, he appears in the Guild, and aids the Fighter to defeat the elemental and save the city by lending him Soulforge. The next day (13) he is again outside the Guild. On Day 16, before the Hero leaves for Raseir, Rakeesh is found inside, and gives a speech to the Hero (different according to each class) and practices fighting with him.

He has the choice to name the Hero as a Paladin, if he is honorful enough, and also hands him the Soulforge to succeed him.

After the Hero saves Shapeir and Raseir, Rakeesh and Uhura return to Tarna with the Hero in Quest for Glory III; their mission is to prevent a war that is brewing between their two peoples and the shape-shifting Leopardmen through the Pledge of Peace. Rakeesh is reunited with his wife, Kreesha, and learns their daughter, Reeshaka, is missing following a peace mission she lead that was seemingly ambushed by the Leopardmen. Rakeesh never believes she is dead, however. Rakeesh pledges on his honor to prevent war and his oath is honored by King Rajah and the Council of Elders ruling Tarna by being granted time to fulfill it. He sets out with the Hero to the Simbani village to start their efforts, but soon has to return to Tarna because of the great pain caused by his injured leg. Kreesha theorizes that the Demon Wizard is still linked to Rakeesh through the injury and is intensifying the pain to disrupt the peace process. The link also allows the Wizard to spy on Rakeesh whenever he is away from Kreesha's house. Eventually, the Hero, Rakeesh and their allies vanquish the Demon Wizard who is inciting the war, and in the process rescue Reeshaka from the Demon's clutches. Before they can celebrate, however, the Hero is transported away through dark magic.

The relationship between the two brothers is rather strained, though they profess to respect each other; in Quest for Glory III, Rajah is seen to scoff at Rakeesh's paladinhood and desire to help humanity.

He has another chance to name the Hero as a Paladin (this time only for the Fighter), if he is honorful enough, and also hands him the Soulforge to succeed him.

Following the Hero's disappearance from Tarna, Logos, the Speaker of Silmaria contacted Rakeesh through Erasmus, to seek his wise councel over the recent death of King Justinian of Silmaria. He was brought to Silmaria to investigate the murder, and he also helped to oversee the Rites of Rulership that will determine the land's next king. Rakeesh and his wife contacted the Sultan of Shapeir informed the Sultan of Shapeir, who agreed contribute 300 drachmas for the entrance of the Hero into the rites.

Rakeesh was discouraged that there is so little he can do (as his fighting days are mostly behind him). Rakeesh, along with Minos, helps coordinate and establish what the Rites of Rulership will involve. He returns some of the Hero's equipment lost when the Hero was brought to Mordavia. Rakeesh's son, Shakra, runs the local magic shop. During the Rites, Rakeesh is poisoned by an assassin, but he is revived thanks to the Hero's efforts and the talents of Salim the dendropheliac apothecary. If the Hero is a Paladin, Rakeesh also prompts him into creating a Ring of Truth.

Throughout his various appearances in the games, Rakeesh demonstrates mystical abilities connected to his status as a Paladin. In Quest for Glory II, he has the ability to make his magical sword, Soulforge, burst into flame. In Quest for Glory III, he uses magical powers to heal his daughter's injuries and, somewhat more mysteriously, has the ability to disintegrate an entire mound of rubble through apparent force of will. Though a formidable fighter, Rakeesh rarely engages in combat during the games, partly because his leg injury hampers his fighting abilities. Despite this, he will accept a sparring challenge in Shapeir in the Guild on day 16. He fights (offscreen) the Earth Elemental in the second game, but his leg prevented him from defeating the magical construct. Alongside Uhura, he battles the Demons in the Lost City in Tarna (also offscreen, go figure). 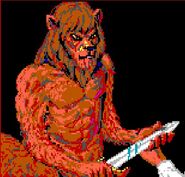