Edit
The information from this article is from the fan game Quest For Glory II: Trial by Fire VGA or fan fiction and is therefore not canon.

Quest for Glory II: Trial by Fire VGA (AGDI) is a fan remake of the original Quest for Glory II: Trial by Fire. The remake was developed and released for free by AGD Interactive (formally known as Tierra Entertainment) on August 24, 2008 for Windows and Mac. Faithful to the original, this game was created with the Adventure Game Studio. It uses the VGA point-and-click interface and its own (very detailed) combat system, making for its own experience (especially fighting a skilled opponent). 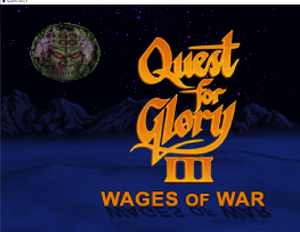 The remake fixed the final screen that originally alluded to the would-be Quest for Glory III: Shadows of Darkness.