Quest for Glory: Extended Edition is a fan modding project for Quest for Glory I: So You Want to Be a Hero (VGA), the classic Adventure Game RPG Hybrid.

QFG:EE is a fan project which aims to expand the world of the original VGA game, using Unity and Adventure Creator. It is being casually developed by one person and is still in a very early stage, despite being developed for many years. Part of the reason for this has been the lack of experience of the developer and the two platform jumps which have been made, with the project originally being on Adventure Game Studio, then moving over to an ill-fated attempt on RPG Maker MV, and finallly finding its way onto the vastly superior Unity game engine. The plan is to expand the stat system, add more story-line/quests, more areas to explore (such as a Goblin underworld), bigger bosses (such as a Dragon), voice acting, modern conveniences, more ways to die and more ways to avoid death.  The game will also be in non-stretched widescreen, therefore around 100 image backdrops are being expanded on the sides.

The game also aims to be self-referential and comedic, whilst respecting the source material. 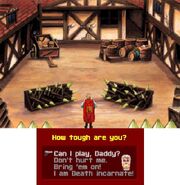 Not the way to get into Baba's hut.