This page deals with the development of Quest for Glory II: Trial by Fire.

Sometimes loops (animation segments) from other games are stolen as temporary stand-ins (for example segments of the Hero walking or riding from Hero's Quest I will be used in the beginning stages of Hero's Quest II).[1]

On HQ1 and QG2, Kenn N. was the leading proponent of dithering. It's had to divide the use of dithering for color and for dimension, since that is how an artist uses those additional colors. Bob Heitman, one of the chief programming engineers at Sierra, hated dithering with a passion.-Lori Cole

Dithering wasn't just for extra colours. None other than Corey Cole explained that the dithering was used to imply textures that are lost when the colours are flattened. Dithering implies the leaves in the trees, the hay on the healer's roof, the grittiness of dirt on the ground, etc."[2]

The VGA/EGA for QG2 was a bad decision on our part. We were asked whether we wanted to have the game out that year in time for Christmas, or wait until after KQ shipped the following year. We figured that if we shipped with KQ, we would get no marketing and would be lost in the shuffle. After the name change, we wanted to get our second game out as soon as possible to try to recapture the audience, and that would take publicity from Sierra. We had no clue what an impact 256 color would have on the marketplace. Needless to say, it blew all the older games out of the water.-Lori Cole

Bits About Bytes Well. we got a little carried away this time. Personally. I have a lot of fun looking at the statistics after finishing a game (believe me, it's a LOT easier than writing the game in the first place!) Here's some of what went into Quesr for Glory II: Trial Br Fire. along with comparative figures from Quest for Glory/· Sn You Want To Be A Hero. The team consisted of up to eight programmers at a time (versus four on Quest for Glory n. ten artists (versus four). two musicians (up from one). and two designers (well. call that 1.75, up from 1.25 last game grin). The game took just over a year Uust as with game I, only it seemed like at LEAST twice as much work with twice the people on the team!) Between us, we managed to create: Quest for Glory U Quest for Glory I 604,000 characters of text 375.000 characters 135,000 lines of source code 111.000 lines (that's 2,840,000 characters vs. 1,980,000 characters) 607,000 bytes of pictures 535,000 bytes 2,835.000 bytes of animation 1,560,000 bytes 630,000bytes of sounds/music 314,000 bytes (We added digitally-sampled sounds for the Soundblaster, PS/I and Tandy TL) Major thanks are due co Larry Scott, who created a new version of the SCI interpreter which removed many of our space restrictions from individual "rooms". This game would probably not have been possible (or at least would have been far more painful to create) without his improvements! We would also like to take this opportunity to point out how crucially important every member of our team was to this project. While the game design comes from Lori and me, the Quest for Glory games "work" precisely because everyone on the team contributes ideas and works their tails off to make every aspect of the game -- design, art, music, and programming -- work in harmony. Each of us has literally given up a year of our lives (most of us at a 60-hour-a-week or more pace) to bring you this game. - Corey Cole

The final city in this game is Raseir, an anagram for Sierra, the company that produced the Quest for Glory series.

The back of the game box shows an early version of the Hero's fight with Uhura, in which the background is not the Adventurer's Guild Hall but the normal mostly-black combat background. The box also has an early image of Ad Avis' ritual room in Raseir, where the Dragon and the Scorpion constellations are visible in the sky, along with a crescent moon. (In the final game the moon is full, and those two constellations aren't visible).

A non-playable demo of the game was released by Sierra. It contains several graphical differences from the final game. Notably, in the finale sequence, the night sky behind Ad Avis shows the Dragon and the Scorpion constellations, as seen on the back of the box. In this demo, the Hero casts lightning at Ad Avis instead of a force bolt, and is killed when Ad Avis' Reversal spell causes it to bound back at him.

There are unused graphics for the Hero wielding a blue paladin sword, much like how he uses in later games. In the game a fighter can use Soulforge empowered by Rakeesh's red flames. The unused blue flame graphics are unique to the hero. When Raskeesh shows off the sword, and empowers with flames are only red, and there are no blue versions of the animations.

The only things in the earlier games that were cut that I really remember was the “Saurus Repair Shop” in QG2 (we ran out of disk space to ship with it), and the“Wizard’s Whirl” game with Aziza also from QG2 (where we ran out of time to develop it).[3] 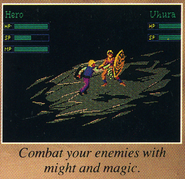 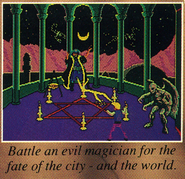