Quest for Glory Omnipedia
Register
Don't have an account?
Sign In
Advertisement
in: Article stubs, Hero's Quest, Games,
and 3 more

Hero's Quest II: Trial by Fire was to be the sequel to Hero's Quest: So You Want to Be a Hero for a September 30, 1990 release under the Hero's Quest banner before the name changed.

Hero's Quest was planned as a four game series which would have followed the character as he or she grew from a wet-behind-the-ears Famous Adventurers' Correspondence School graduate, to a true Hero . . . and beyond!

Just before (or soon after) the release of Hero's Quest 1 they began story-boarding Hero's Quest II: Trial by Fire, which would take the player's Hero into the exciting and mysterious world of the Arabian Nights ... a land of golden sands, turquoise skies, wondrous magic and fantastic adventure, where the plaery could continue with their characters from the first game, or start new characters from scratch.

Sometimes loops (animation segments) from other games are stolen as temporary stand-ins (for example segments of the Hero walking or riding from Hero's Quest I were used in the beginning stages of Hero's Quest II).[1]

You may remember this game as Hero's Quest. After publication of that game, it was discovered that the Milton Bradley Company had already trademarked the name 'HeroQuest', and a decision was made to change the name to avoid confusion. Only the name has been changed -- it's still the same great game."

Thus, the second entry became Quest for Glory II: Trial by Fire and the Hero's Quest name got dropped entirely with the re-release of Quest for Glory: So You Want to be a Hero in early 1991.

Sales of Quest for Glory II were hurt by as much as 50% due to the name change. Sierra received a large number of calls each week from customers asking when 'Hero's Quest II' was going to be released. Sierra had to change the name of the series to Quest for Glory when the original name of Hero's Quest turned out to be the trademark for a board game by Milton Bradley. Interestingly enough, Milton Bradley had at the time recently announced that they would soon market a computer game called Hero Quest (sic, see HeroQuest). The official word is that their release of the computer game had absolutely nothing to do with Sierra's old game by the same name. 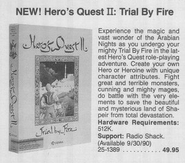