Quest for Glory Omnipedia
Register
Don't have an account?
Sign In
Advertisement
in: Characters (School For Heroes), Characters (Hero-U), The Tribunal,
and 14 more

This article or section contains information related to Hero-U by Transolar Games. This information may not reflect official Quest for Glory universe as originally portrayed in material published by Sierra On-line or Activision.

Falcon is one of the four Heroes, and the twin brother of Hawk the Warrior (King of Silmaria), and married to Erana. His younger siblings include his brother Owl the Wizard and his sister Wren the Rogue. Their father was Philip XV former king of Silmaria.

He was a toddler prince of the southern kingdom of Silmaria. Shortly before his parents were killed by a usurper, he and his brothers and sister escaped with the help of gypsies and the wizard Erasmus, where they were raised by old lady Wilhelmina in the village of Alpendorf. He was gifted a shield from his father which represented his destiny to becomes a paladin.

As a young child (age 16) he traveled to Siegburg (and/or Spielburg (Hero-U)) not long after his brother Hawk, to try to get him to return back to Alpendorf (Wren and Owl followed after, a few days later) He later, along with his siblings rescued the kingdom.

Several years later, not long after having saved Tarna from the demonic invasion: Katrina needed a pawn, she decided to summon Falcon to Mordavia would certainly be the safest bet. She did not want to summon all the siblings as their powers combined would have proven too powerful a danger to her. Since she perceived Falcon to be the weakest, yet likeliness to be a useful tool, she summoned him to Mordavia (he found himself trapped in Dark One Cave all alone). She met him outside the cave, to let him out. She suggested he go to the village where it was safe, and wait there (while she figured out a way to set her plan to use him). She warned him against going out into the woods at night. He didn't head her warnings though, and left the village one night where he was ambushed near the cemetery by a revenant ghoul. Katrina traveled to the cemetery to help him, lest he didn't survive, ruining her plans. She witnessed he had become more capable of defending himself than she had thought he would be able to, as she watched him from the shadows.[1]

The other siblings reached Mordavia by other means, in an attempt to rescue and help their lost brother. Together they worked together to save the darkened nation.

Some ten years or so passed, the now more matured Falcon traveled to Silmaria, to help save the beleaguered nation. During this time, he rescued Erana from Hades, and become her husband.

Later he and his wife became two of three members of the Paladin Tribunal who lead the Paladins of Silmaria and beyond.[2] Aside Hawk the Warrior, his siblings are Wren the Rogue (Chief Thief of Silmaria), and Owl the Wizard.

He is a possible mentor to new Paladin recruits, Erana being another, and Kreesh being the third. Each representing a separate facet and way of being a Paladin.

At some point while Falcon was visiting Eire he met Moira Glenshannon, and told her she was a Paladin. Moira fell in love with him, but it was not to be as he had already found his true love. He trained her in the way of the Paladin, and one night while they were attacked by Bogies and a Banshee, he was injured and she took up his sword to fight off the attackers. They were surrounded by the bodies of the Bogies when the Banshee attacked. Becoming covered in blood and grime. She could barely lift the sword, and it was all she could do to keep the Banshee at bay until morning all the while protecting the injured Falcon.

During his time in Siegburg, he fought only with his shield. His ability was shield bashing his opponents and defending his brother Hawk.

He is a clean-shaven man of sandy-gold hair pulled back into a long ponytail. He has a kingly look to him in his posture and a stern look on his face. The tabard he wears has a symbol of a white stag upon a field of green. His sword is apparently capable of red flame similar to appearance of Rakeesh's sword in QFG2. However, technically he is not seen wielding it, rather Moira Glenshannon was wielding it above him in his place, while defending him.

Falcon's current paladin sword flame is apparently yellow fire (though this may be adjusted back to 'blue' as that was the color in for 'blue flame of honor' in QFG3).[3]

Falcon is based on the Paladin character class from the original QFG2. Images of the Paladin appear below. 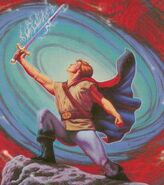