Quest for Glory Omnipedia
Register
Don't have an account?
Sign In
Advertisement
in: Wizards, Males, Humans,
and 9 more

Erasmus is a powerful, friendly and somewhat eccentric Wizard who helps the Hero in his quests. Never apart from his Familiar Fenrus, the duo provide comic relief along with hints, advice, and spells.

100 years ago (after the passage of Erana) Erasmus built a vacation home (a strange purple building) in the Spielburg Valley high atop Zauberberg Mountain, guarded by a gargoyle who will test the player with three questions. Sitting in his high tower, he loves to tell pun-laden jokes and engage in the game of Mage's Maze, and is known to associate with other magic users in the valley such as Zara (who doesn't appreciate his humor), Henry the Hermit, and even the normally shunned Baba Yaga; with the latter they even had played cards but because Baba Yaga cheated, Erasmus also cheated (but he still was losing) and he taught her a Transformation spell.

He lent his name for Erasmus' Rootin' Tootin' Root Beer but the company closed soon after.

He is found there in the first game, and teaches the Hero who wins the Maze game the Dazzle spell.

In the second game, he can sponsor a magic user to the Wizard's Institute of Technocery (WIT), turning the Hero into a fully accredited Wizard.

In the fourth game, Erasmus attempts to locate the Hero using his crystal ball, but the dark magic in Mordavia prevent him from getting a clear "signal." He makes at least four attempts, and can be heard occasionally conversing with Fenris about the problem while the Hero tries to sleep in the Hotel Mordavia. At the end of the game, he finally gets the crystal ball working, summons the Hero to Silmaria, using the Teleport spell, setting up the fifth game.

In Dragon Fire, he sponsors the Hero in the Rites of Rulership, which will allow the Hero to earn the title of King of Silmaria. He explains that the former King was assassinated and the kingdom has been invaded—a situation desperately calling for a hero to aid the land. Erasmus is later drugged into sleep by the scientists at Science Island, but he and the other victim Shakra are cured by the Hero with the assistance of Julanar and Salim Nafs. The Prophecy Stone, a magical rock he was researching was stolen from Erasmus while he was living in Spielburg.

Erasmus first appearance is of a bald wizard, sporting a beard, and wearing green robes.

In later appearances he usually shown wearing purple, often has a pointed hat, and not only has a full beard, he sports full head hair or even dreadlocks.

In his third appearance in dreams in Mordavia he is wearing red robes and purple hat.

He considers Magicians and Sorcerers to be narrow minded as they specialize in aspects of Magic, while he prefers to master as much as possible, considering himself a "dilettante".

The most powerful wizard living in this world. Definitely a good friend to have.[1]

Erasmus the wizard is known the world over as a whiz of a wiz. You have known him for many years, and have long admired his "Spelling." He is also somewhat - eccentric - and has a penchant for silly riddles. In spite of this, he has taught you well in the magical arts. Let us hope his instruction will keep you safe during your latest travails. 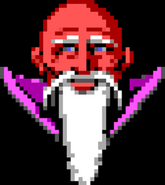 The characters of Erasmus and Fenrus predate Quest For Glory having been invented in The Spell Book fanzine in a series of comics by Richard Aronson and Lori Ann Cole.

According to Lori Cole, the first version of Erasmus was per her design... the later ones were more artist interpretations as she had less and less creative control over the art. The first version resembles Erasmus' appearance in Birth of a Hobbit.

At the end of QFG4, Fenris mentions that Erasmus had tried to use the 'Teleport' spell before, but brought only the clothes, but not the person... They mention he's going to try the spell again. In the game, the Hero is teleported to Mordavia by Katrina with only his clothes and armor (and a backpack to hold his gear). Most of his weapons and items in his backpack with the exception of his Money Pouch (containing a few golden crowns) were left behind. It's suggested in QFG5 that this random gear and weapons were left with Rakeesh (including important items such as the Katta Pin, and the Soulforge).

This begs the question, who was the first person that Erasmus tried to summon with the Teleport spell, who was left naked? If it wasn't Hero (who made it with all his clothes and armor), then who?