He was a friend of Brutus. He wears a cloak, possesses the talents of a thief, and shows extreme skill with poisoned daggers.

After exiting the town's gates at least twice, during times of midday (11-13) or mid-afternoon (14-16) he stands outside the gates of Spielburg Town playing with his daggers. He seems very well knowledgeable about the Spielburg Valley and its underground, including the Thieves' Guild (Spielburg). He seems to be a double agent between the Guild and the Brigands, without the Chief Thief's knowledge.

For a price, he provides the Hero with pieces of basic information.

One day, after the return of Baronet Barnard von Spielburg he had arranged with Brutus a meeting at midday in the Archery Range at the south wall of Spielburg Town to discuss about a dangerous-looking stranger, and also the new password to the Troll cave. Bruno planned to allow the stranger to distract brigand leader Elsa von Spielburg in order to kill her.

Bruno then goes to Silmaria and works as a hired assassin for Minos. His first two victims is Justinian and the Chief Thief of Silmaria. He is found in at certain times in the Dead Parrot Inn and the Thieves' Guild, always concealing his face with a cloak. He meets the Hero and talks in a glaringly hateful manner. In addition to the pay received for the murder of the former King of Silmaria and other marks, he eagerly seeks personal revenge on the Hero and Elsa for ruining his plans in Spielburg.

It is implied that he murders both Kokeeno Pookameeso and Magnum Opus, two of the contenders for the throne of Silmaria, in order to help Minos carry out the prophecy that will release the Dark Dragon. He also injures (or kills) Rakeesh and Ugarte with poisoned daggers. He makes his move against the Hero during the Rite of Justice. He is then mortally wounded and reveals his identity but not who hired him. 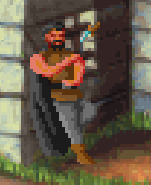 Bruno can't be killed. When attacked, he is always faster than the hero.

In QFG2, Wilmer the Bartender is compared to Bruno.