Baba Yaga is the main antagonist in Quest for Glory I: So You Want to Be a Hero and a major character in Quest for Glory: Shadows of Darkness. Known for her chicken-legged hut, she is a dangerous Ogress of great magical power. When not using her evil powers, she enjoys culinary experimentations such as eating adventurers, mandrake mousse or Elderbury Pies.

Baba Yaga is originally from Surria, a "big land to the east" of Mordavia. The Famous Adventurer once met her, and was asked over for dinner. He refused to eat the food offered him as he didn't trust it. Baba Yaga referred to him as 'sweet Prince Ivan', but before she could eat him he fled.[1]

She later traveled to Spielburg, where the Baron tried to force her to leave and she first cursed the Graveyard, filling it with zombies and ghosts. Baron responded by sending a contingent of his Baronial Guards to her hut. After quickly killing the guards and decorating the fence with their skulls, she let only the captain alive to back to him and pronunced her curse on the Baron, before dissolving into a sticky black goo. In the following years Baron saw the death of his wife and the disappearance of their son Barnard and daughter Elsa.

She seems to have a somewhat odd friendship with Erasmus, as the two play cards together, and Erasmus taught her the frog transformation spell. Though they seem to otherwise hate each-other as they bicker and cheat each-other in their games whenever they get together.

The witch has a fondness for turning wandering adventurers into frogs, and using them to run errands for her (such as retrieving Mandrake Root from the graveyard at midnight). The Hero drives her away by reversing her own spell on her, transforming her into a frog.

After abandoning Spielburg, she eventually regains her true form. The tale spreads far and wide, however. One day she is in the audience when a Gnome named Punny Bones makes a series of jokes about it (causing her to promptly curse him into losing his sense of humor). She decides to go to Mordavia, a small valley filled with a lot of dark magic eminating from the Dark One's Cave. Not long after her arrival, the Hero turns up in the valley. Baba Yaga first plans on eating the Hero, but quickly forgets about revenge when she realizes she can use him to fetch her an Elderberry Pie.

Baba Yaga is described as selfish, miserly, and out for herself. The gypsies of Mordavia tell the Hero that she will aid him only if he aids her first. Baba Yaga possesses one of the rituals to free the Dark One, and instructs the hero that a powerful wizard could use the rituals to banish the Dark One instead, although she remarks the hero's power is not enough to do so. She lives with her pet bat and spider (Bats and Scarlett); and her chicken legged hut is always guarded by Bonehead, an enchanted skull. In order to access Baba Yaga's hut in both games, the Hero must give her something she wants.

While others might view her as evil, she is actually rather quite neutral. She can be friends the likes of Erasmus and Fenrus, but at the same time use 'evil curses' against her enemies. She is usually helpful to those who help her first.

She has never been one to hold a grudge long, at least in her dealings with the Hero. 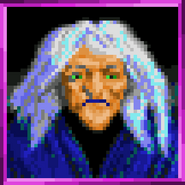 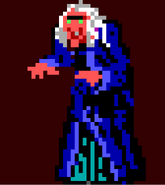